Caterina was born in Bologna, on September 8, 1413, she was the daughter of the Ferrarese nobleman Giovanni de'Vigri, professor of law at the University of Bologna. Despite being born into wealth and privilege she preferred to follow a very spiritual path and followed a monastic life of seclusion. 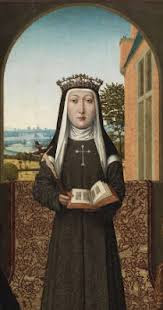 An image of Santa Catherine in life

She was described as being well loved during her life, and with a lively personality. She became interested in art, music, song, dance, painting and literature. There is a viola, some paintings and various writings created by her, including  her book The Seven Spiritual Arms, The Twelve Gardens, the Rosarium, and The Sermons, which has been preserved. 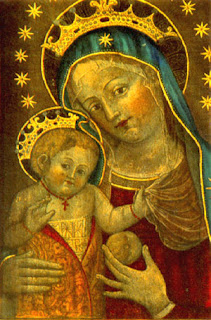 Artwork by Caterina of Bologna

Caterina died on 9 March 1463 and was buried, without posessions, in the bare earth. Surprisingly her body after death did not decompose.

"When the grave was ready and when they lowered the body, which was not enclosed in a coffin, it emanated a scent of indescribable sweetness, filling the air all around. The two sisters, who had descended into the grave, moved with compassion on His beautiful and radiant face, covered it with a cloth and placed a rough table a few inches above the body, so that the clods of earth would not touch it. Yet they stared at him awkwardly that the face and body were still covered when the pit was filled with earth. The sisters often came to visit the cemetery, cried, prayed and read at the grave, and always noticed the sweet smell that surrounded it. Since there were no flowers, no herbs next to the grave, but only dry land."


And after her exhumation:

"When we found the body and cleaned our faces, we noticed that it had been crushed and disfigured by the weight of the wooden table that had been placed on it. In addition, by digging, three of the sisters had damaged it with a spade. We placed it in a coffin, and we were about to rebuff her, but a strange impulse prompted us to place it temporarily under the portal. And it was then that the crushed nose and the entire face gradually regained their natural form. The deceased became white, beautiful, intact, as if she were still alive, her nails were not blackened and she smelled delicious. All the sisters were deeply agitated; the scent spread in the church and in the convent, impregnating the hands that had touched it, and there seemed to be no explanation. After she became quite pale, she began to change color, becoming redder, while her body began to emit a pleasantly perfumed sweat. Passing from the pallor to a color of incandescent amber, She exuded an aromatic liquid that at times seemed like limpid water, and sometimes a mixture of water and blood." 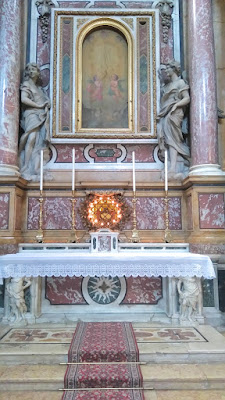 
Immediately after her death she was hailed as a saint, and on 22 May 1712 she was canonized by Pope Clement XI. 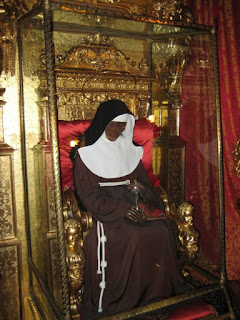 The incorrupt body of Santa Caterina de 'Vigri is preserved in Bologna in a chapel of the Sanctuary of the Corpus Domini monastery in Bologna founded almost 600 years ago.

On a sunny Wednesday morning this April I visited the monastery located on a quiet street in a very non descript neighbourhood of Bologna. The church is very plain from the outside, but beautifully humble and uplifting in the interior. I had been hoping to spend time with the Saint, and although it was not a day the public were normally allowed to be with her, the kind nuns allowed me to spend time alone with Caterina. 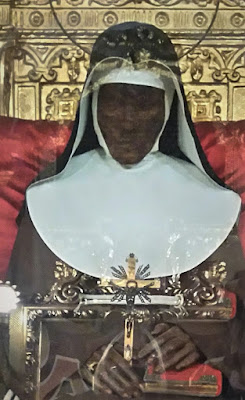 My photo.  My reflection in the glass with Saint Catherine.

She is perfectly preserved with the exception of her blackened skin from centuries of candle smoke, and there is a smell of flowers that surrounds her. She sits upon a gold chair with her bible in her hands.

Words cannot truly express the emotion and feelings I had in her presence. I am not Catholic. But I felt joy, and a sense of peace with her. I have visited several chapels and Cathedrals in Italy and I can truly say none has moved me so much as the Sanctuary of the Corpus Domini and Saint Catherine.