UFOs and nukes seem to go together. Twice I have seen UFOs near or hovering over a nuclear power plant and I am not alone in having this type of experience.  UFOs or UAP to use the more modern and trendy term are also seen at nuclear missile sites. And have disarmed them that at least once that I'm aware of.

The question comes to mind why does the phenomenon appear at nuclear sites? And often enough that this has been noted by many UFO investigators?

Nuclear energy and nuclear weapons are not the same thing. But both terrify most of us.  And maybe the answer to why they are so frequently seen at nuclear sites lies somewhere in our collective fear? Are these manifestations in the sky a result of our own terror? Does it provoke or invoke the phenomenon we witness like a cosmic answer to our subconscious cry for help? A modern version of the gods answering our prayers, only in a more scientifically believable format for the age of rationalism and information?

Some food for thought.

Images taken from a South Korean protest against the use of nuclear power plants. Protesters are wearing traditional masks which are reminiscent, at least to me, of the Greys. 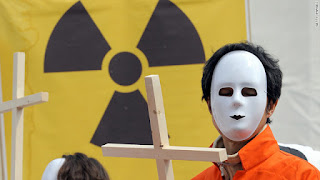 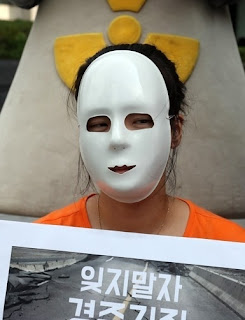 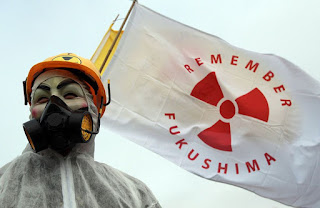 After I initially shared this blog I was alerted to some research dating back to the 1980s that very much echoes my thoughts.
"Stephen Weart understood the point as far back as 1989 in his Nuclear Fear: A History of Images, ufos are transmutational symbols; a psychological, creative act of mythopoesis
“Awesome modern technology, said the UFO stories, must be accompanied by a full-scale transmutation of civilization and everyone within it.”
The Atom wields deep meaning in the explosion of inner forces within the individual.
See “So What does it All Add to” pp. 7-11 in"
http://www.astronomyufo.com/UFO/SUNlite6_6.pdf
Hat tip to Mrherr Zaar of the Radio Misterioso  FB group for the above information and link.