Several nuclear power plants around Sweden were simultaneously visited by mysterious lights and objects this past Friday January 14th 2022 at approx 8:30pm resulting in numerous reports and even a police chase.

Daniel Petersson and his family were driving southward on highway E6 when they first spotted a large light near the Ringhals nuclear power plant. At first the family thought a plane may have been in trouble and they began to film the large, bright light. The Petersson's video can be seen on local Swedish media here. A security guard also witnessed what he thought might be a large drone and quickly notified the authorities. 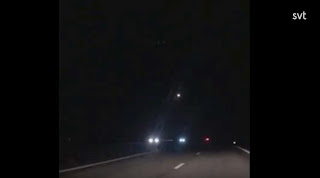 Still taken from the Petersson's video of the mystery light. 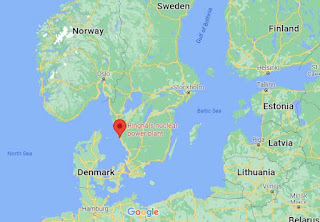 Google map of the location 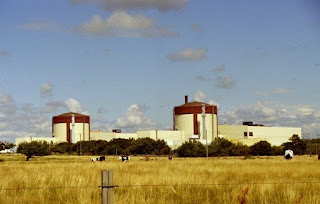 A 2011 view of the Ringhals power plant.

Ringhals is the largest nuclear power plant in Scandinavia, and has had two of its four reactors shutdown. Reactor 1 was permanently taken offline on December 31st 2021, two weeks before this incident.

The power plant has been in operation for 44 years, but has had a history of safety concerns promoting extra monitoring from the Swedish Radiation Safety Authority and protests from Greenpeace and local citizens.

Roughly at the same time as the Petersson sighting other mysterious lights began appearing at nuclear power plants around Sweden namely Forsmark, Oskarshamn and Barsebäck, the last one being fully decommissioned.

Police at Forsmark also witnessed the UAP and using helicopters and police drones attempted to intercept it for up to an hour, and to no avail!  "The first observation from the patrol was made at 20.51 and we lost contact with the drone 22.10," says Petra Blomqvist, press spokesperson for the police. "According to the police, there is still no indication that the drone has landed inside the area of the nuclear power plant or that any object has been released from it."

All incidents were investigated by police and public statements were made by each with some at first denying the possibility of drones being the cause particularly of the Ringhals and Barsebäck events. The armed forces were also notified and so far no explanation has been provided other than the possibility of military drones by the Swedish Minister of Defence.

These sightings of mystery lights and drones are similar to American ones from a couple of years ago that were never satisfactorily explained to the public either.

In 1990 I witnessed a large red UFO hovering over a nuclear power plant in Pickering Canada, so these types of nuclear-related sightings are very much of interest to me. I have written about nuclear power plant and nuclear missile UFO sightings my own experience, and evolving ideas on why these locations are the scenes of UFO events.

While I do not think the psycho-social hypothesis is a perfect coverall explanation for all UFO sightings, including these types of events, I do think it would be foolish not to consider the wider social context in which these UAP appear.

We do know that UFOs appear at times of great social upheaval. Consider the UFO waves in Europe and Russia during the late 80s and early 90s as the USSR collapsed, and the so-called Foo Fighters appearing during WWII to both military and civilian witnesses. I could give many more examples, but I would encourage those interested in examining UFOs from this angle to read Eric Ouellet's Illuminations: UFOs as a Parapsychological event.

With this in mind it must be noted that these current incidents came one day after Sweden's military started patrolling the main town on the Baltic Sea island of Gotland amid increased tensions between NATO and Russia, and a recent deployment of Russian landing craft in the Baltic. Something that has been extremely troubling to many European citizens amid the ongoing stresses of living through the pandemic. 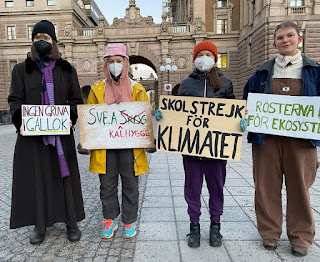 If these mysterious Swedish lights and drones are UAP what may these events be trying to tell us? Are they an outward cry for help from a population experiencing tension and prolonged anxiety from Russia, climate change,  and the Pandemic?

This was in no way covert. These incidents all occurred at the same time and on the same day and were witnessed by many people including police who unsuccessfully chased at least one object.

Why appear over several nuclear power plants simultaneously and including ones not operational if not to simply and absolutely get the attention of authorities?

These reports are nearly identical to a wave of drone sightings in France occurring in 2014-15 that involved sensitive nuclear submarine sites, nuclear power plants, and government buildings. It should be noted that this period also had acts of terrorism in France, creating a lot of anxiety in France and Europe at the time.   See news items here and here.

We will likely never know.

As always I love to hear your thoughts. Please leave a comment if you have some ideas on these mystery lights and drones.

News Items are in Swedish.

Update: An unknown "drone' (it seems drones are the new weather balloon) was also reported by several witnesses over the Swedish parliamentary buildings at the same time the UAP activity was occurring over the nuclear power plants. These events are very overt, whatever these things may be.
Update January 29th: Two weeks later more than 200 reports of mysterious lights and drones over Swedish skies and police have ruled out any foreign involvement. In other words is not the Russians or the Chinese.
https://www.urdupoint.com/en/world/swedish-police-rule-out-foreign-powers-behind-1458594.html
at January 16, 2022 2 comments: