Signs Your House Is Haunted 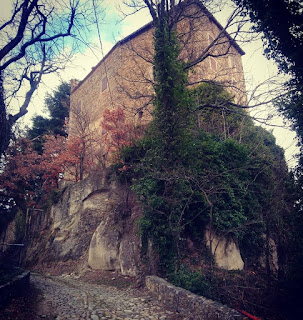 Many years ago I used to live in a very haunted house, and one of the lessons that experience taught me was how to recognize the signs of a haunting. In hindsight most of the houses I have lived in were probably haunted, but in general the ghostly phenomenon was so subtle, and so rare, that had I not been very observant, or a believer in strange things, I may have just written them off as something mundane, and likely forgotten about it.

Most of us live busy and exhausting lives that take us away from where we live for the majority of our waking hours. The corona virus pandemic has changed all of that. Almost all of us are now either willingly or forcibly locked inside our homes, for who knows how long. These are anxious and turbulent times.  And now, as we are spending almost all of our time inside our houses, and apartments, and rooms I wonder how many people might be experiencing odd happenings that they may have not noticed before?

The following are some signs that your home may be haunted that I have learned through my personal experiences with ghosts, and through my many years of investigating hauntings. Its important to remember that since we are all living with a lot of anxiety and our routines have been upended a lot of what we may perceive as a haunting could have a natural explanation.

Strange Sounds: Are you hearing unusual sounds? Many hauntings do start out with strange sounds, knocks, loud bangs with no explanation, phantom footsteps, scratching sounds, disembodied voices, whispers, and even growls. Some sounds such as the house settling are normal, and you just might not be used to hearing them. If you can investigate the source of the sound you may be able to explain it.

Unusual Feelings and Sensations: Do you ever feel like you’re being watched when there is no one with you in the room? Have you ever had the sensation of being touched by unseen hands, or felt the temperature suddenly drop with no apparent explanation?  All of these have been reported by people who live in haunted homes, including myself.

Strange Dreams and Night Terrors: I think right now we are all experiencing these, but in normal circumstances people living with ghosts occasionally report having nightmares, and sleep paralysis. 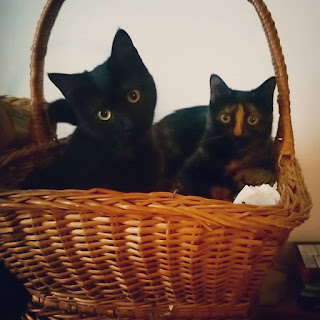 My girls Pixie and Merry

Pets Acting Strangely:  Right now our pets are likely feeling the anxiety we have due to the pandemic. My own cats Pixie and Merry are very clingy lately and seem to know something is not quite right. But in general animals might react to spirits and ghosts in ways that are unusual such as barking at something only perceptible to them,  or not willing to enter certain rooms.

Objects Disappearing: When I lived in that very haunted house I would routinely have objects moved around, disappear, and sometimes reappear in places I knew I never put them. Ghosts are definitely tricksters. If this is happening a lot and your not in general absent minded you may have a ghost in the house.

Poltergeist Phenomena and PK or Psychokinesis:  This is more rare, but would include things like unexplained water puddles, fires, furniture moving, doors slamming, lights turning off and on etc. Electronic disturbances including strange interference with radio, tv, internet, and phone calls, and batteries draining are another sign that a place may be haunted.

Unexplained Shadows: Do you see shadows lurking out of the corner of your eye that are not there when you look around? Do you see shadows where one should not be? Shadow people are a newer phenomenon, but masses or balls of black shadow date back for centuries in the ghost literature. If you experience any of these unexplained shadows your house could be haunted. 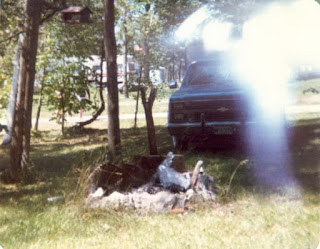 Light anomaly or reflection? Taken at a place that was reputedly very haunted.

Balls of Light and other Light Anomalies: I am not talking about "orb" photos which are mostly explained, but visually seeing balls of light with your own eyes. These are frequently associated with hauntings and are described in many different colours.

Apparitions: These include shadow people or human shaped shadows, but often they are described as fully solid looking 3D people or animals that witnesses would never have guessed were a ghost until they did something freaky like vanish or appear to walk through a wall. 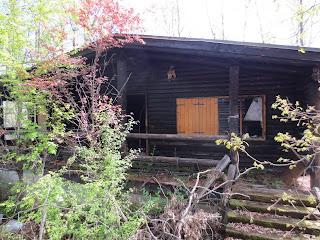 An abandoned cabin in the woods near my home, that has a dark, and tragic past.

Haunted History: Many haunted houses have a tragic or violent past or are perhaps built on land that has a history of turmoil. The home itself may have a long history of ghostly activity This is not true with all haunted houses. I have investigated ghosts in brand new buildings with no history nor the land they were built on. In those cases it seemed the people were haunted and not the place.

If you are worried that you may be living in a haunted house please keep in mind that hauntings are never like they are portrayed in the movies or horror fiction. When I investigated haunted houses one of the main things I took away from talking with people is that they were more afraid of what might happen than what had actually happened ie: their imagination was driving their fear more than the ghosts were.

Most hauntings end as swiftly and mysteriously as they begin with no lasting harm, but there are some tried a true methods to either live with ghosts or send them on their way.  In a few days I will write about some of the methods I've personally used and found success with.

Are you living in a haunted house? Can you add something to these signs of a haunting? If so, please leave a comment.

Some of the suggestions I've been given in addition to the signs listed in the blog:

* A history of addictions or tenants with a addictive personalities
* Religious Iconography and or an overtly religious household
*Location --- near a cemetery, church, ravine, wood...
*History of Trauma --- either in the home or on the land
*Ratio of females to males living on the property
*Objects appearing and disappearing
*Strange smells that cannot be accounted for

These came from members of the Paranormal Experiences and the Pandemic Facebook group. Thanks so much to everyone who added to this post and please feel free to join the group.