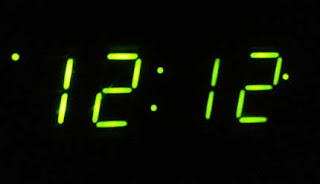 Synchronicity is a word that was coined by C.G. Jung and is defined as the simultaneous occurrence of events that appear to be significantly related, but have no discernible causal connection ie: meaningful coincidence. Synchronicity, and synchronistic-mysticism is something that I study, research and practice. I pay close attention to these meaningful coincidences, and particularly those with repetitive number sequences.

Despite the fact that I have never been very good with numbers I have always and not so secretly wished I was a Math geek like my Dad was and my sister is. My mind is just not cut out for advanced mathematics, however I do enjoy numbers. And I have had a special relationship with the numbers 11, 22, and 23 since I was very young. By relationship I mean that through my own curiosity and observances I have noted these numbers appear to me often, in repetitive sequences and in significant ways, and times.

I am not alone. This happens with many people and with different sets of numbers, and there are many schools of thought on why this occurs, and what the meaning behind the appearance of these numbers may denote for the experiencer. If you are interested in researching these potential meanings and notions a search on Google will bring you many, many hits. In fact humanity's fascination with numbers in general, and numerical mysticism is both very ancient, and complex. With 1111 and 22 in particular there are cults built around them. And my lucky number 23.

Many years ago when I was working from home, and during an 11:11 wave (for UFO geeks think like UFO wave) so to speak ie: I was seeing this sequence often, and I decided to run a little test. I covered every clock in my home, and I removed my wrist watch. 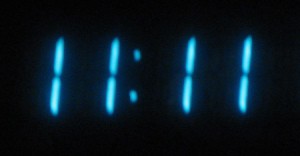 The very morning I did this little experiment, and with the radio on a CBC morning program the announcer called out the time as 11:11am. This was so random, and unexpected that I was floored. I was seriously gobsmacked. In fact I started laughing. I found it quite funny, and immediately started uncovering the clocks. So I have tested some of these ideas, including the most mundane that we train ourselves to look at clocks at certain times, or scan receipts for number combinations and then simply affix a special meaning to them, which the Cosmic Joker saw fit to play a prank with via the radio announcement.

For an ambitious, fascinating and artistic study of numbers, and the significance they can play within our live please do have a look at The Secret Lives of Numbers.

The above video link contains some screen-caps that are taken from archive.turbulence.org

The authors conducted an exhaustive online empirical study in order to determine the relative popularity of every integer between 0 and one million. The resulting information exhibits an extraordinary variety of patterns which reflect our culture, our minds, and our bodies. They surmise that their data-set is a numeric snapshot of the collective consciousness; herein they return their analyses to the public in the form of an interactive visualization, whose aim is to provoke awareness of one's own numeric manifestations.


The manifestation of specific number sequences such as 1111 or 2222 have always seemingly occurred to me prior to, during, and just after significant changes within my life or those lives of people very close to me. These timeframes and circumstances are ones that one might consider to be liminal; at a point of change, a threshold, in between one state and the next.  Occasionally they are accompanied by PSI ie: psychic disturbances, and I will give a very recent example of one.

Lately I have begun experiencing 1212. The other day I came home and my iPod docking station had been switched to on (anonymously), no one, but my cat was here, and my cat is not that dexterous. My iPod is password protected and it takes two swipes of the screen, plus a password and then a touch to the app to launch a music player. I have 1000s of songs on it, but when I walked in through my front door it was very loudly in the midst of a Lovecraftain style dramatic recording about a Homunculus, yet another Fortean subject that I am currently very interested in and experimenting with. I had forgotten I had even loaded up this particularly recorded story and it certainly wasn't on my last listened to playlist. The incident was very John Keel-like in it High Strangeness factor. But if that was not weird enough, the time on the docking station (which should have been in sync with the device (which was 6pm-ish) was displaying 12:12 am. Very odd and meaningful considering I have been waking up randomly to seeing that specific time 12:12 over the last month.

I keep a journal of synchronicity, and I would suggest anyone who experiences them to also keep a record of these. Some synchronicities turn out to be not so important or meaningful and others much more so and highly significant in hindsight. I have actively manifested synchronicity with success, and in doing so have created  unexpected and complex, and enriching experiences, (along with some darker ones) these will be in part the focus of my planned book on UFOs, Synchronicity and Magic.

If you have had a similar experience with numbers or a haunted iPod please feel free to share in the comments. I'd love to hear more.
at February 19, 2018