"Last night I saw upon the stair
a little man who wasn't there.
He wasn't there again today.
Oh gee, I wish he'd go away!"


I love a good mystery......which is why I chase after UFO's, Ghosties, and other strange beasties....in a conversation with a friend the other day I had the opportunity to remember, and relate a strange experience from my childhood, which may have in turn been the impetus for my deep interest in the paranormal. My encounter with the "Impossible Little Man" is from way back, 1973 to be exact, and I was 5-6 years old. 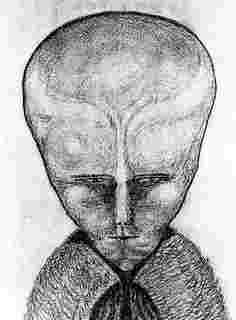 In '73 my Mom was pregnant with my younger sister and my parents were looking to upgrade their home. Often they would take me out with their real-estate agent looking at houses. One house in particular was in a then newly developed neighbourhood, but on land with some historic significance.

The house was brand new at the time, and therefore never lived in. Being a kid I was itching to explore, and seeing it was unoccupied I was given free reign. And I did explore on my own bottom to top. I came to one bedroom that was just too cool!!! It had skylights, and I said to myself this is soooo going to be my bedroom!!!!! I whirled around intending to run down the stairs and tell my parents, and the realty lady that I picked MY room ...

And that is when I saw him .... He was standing in the corner of the bedroom. A little man, slightly smaller than myself at age 5-6. He was wearing non-descriptive clothing, looked rather stern and was staring directly at me. I remember being shocked. I remember blinking, looking away, and back again and he was still there. I was probably scared, that I can't really recall, but I do remember knowing he was "wrong" ... not supposed to be there, not "real" ...

I have no idea how much time passed, but eventually I heard my parents and the realtor outside of the door. I looked at my mom in the door frame, and gingerly made my way past the little man who had kept his eyes fixed to my own the entire time.

I said nothing ..... But I loathed the house from that point. My father put a deposit it on it, but the deal fell through ... and I was relieved ...... we eventually moved elsewhere.

Many years later I told both parents about that day. My father was a scientist and atheist, and my mother more of a nature loving free spirit, but who was still very level headed ... and they both were supportive of me. They never insulted my intelligence....or in other words, if I said something happened, they trusted my word that something had indeed occurred that I felt was important enough to tell them.

My mother claimed to have recalled that day, and how my demeanor did change dramatically, but she just wrote it off ... and I said nothing to her at the time.

Several years after writing this post, and with the help of another friend who is a professional scientist and very well versed in UFOs and open to the occult, I came to consider my "little man" may have been a homunculus or  -> literally "little man." The image I have included is LAM which is Aleister Crowley's homunculus. This is not a true representation of what I encountered, but its close enough that I thought I'd include it.