Reflections of a Witch 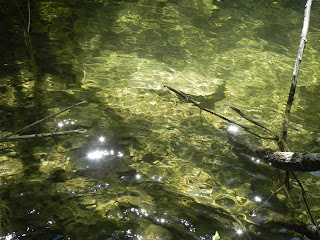 
"Sorcery's deepest secrets are inscribed in the Land. They are etched in the bark of trees, and they are announced in the gurgle of streams and rivers. Learn to read these things, and there's nothing you can't know. The wind carries these sorcerous secrets; the earth hides them in her bosom, and yet, to eyes that really see, there's no real trouble finding them. You'll have more troubles really using your eyes to their fullest potential than you ever will with generous Nature revealing her treasures." 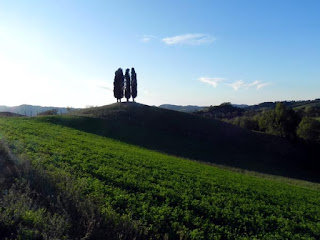 
-The Resurrection of the Meadow

David Abram says it best, when he says:

"Each place has its own mind, its own psyche.
Oak, madrone, Douglas fir, red-tailed hawk, serpentine in the sandstone,
a certain scale to the topography,
drenching rains in the winter, fog off-shore in the summer, salmon surging in the streams -
all these together make up a particular state of mind,
a place-specific intelligence shared by all the humans that dwell therein,
but also by the coyotes yapping in those valleys,
by the bobcats and the ferns and the spiders,
by all beings who live and make their way in that zone.
Each place its own psyche.
Each sky its own blue."

An excerpt from Forgetting Human, pt. IV The Spirit-Language and the Sorcery of Sense by Robin Artisson

The entire series of Forgetting Human is available on the American Folkloric Witchcraft blog.

I felt this connection to the land very deeply when I was in Northern Italy this past Autumn 2017. There, in the magic of the "sunset place," the land is at peace with her people, and I was blessed to be gifted with a treasure from the spirits who reside nearby in an ancient necropolis. I will write further on this in another blog post.