A Different Kind Of UFO 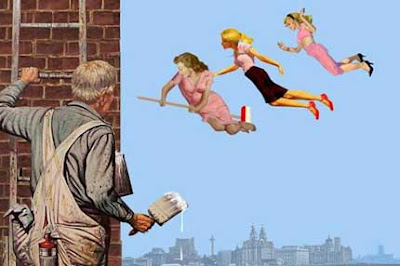 This highly unusual and very interesting report of flying women was sent to me by my good friend and colleague in the documenting of the strange, Albert S. Rosales this past Winter Solstice. This appeals to my UFO-ish and Cosmic Witchiness.


Insidious heat crept into the country at the end of May and bubbled road tar and inflamed tempers, when two painters saw an incredible sight. A perspiring 17-year old apprentice decorator named Dominic Bassett took off his paint-splattered T-shirt on the roof of an office building in one of the higher parts of Birkenhead not far from Bidston Hill. The sounds of distant shrieks – female shrieks – and girly laughter came from somewhere up in the burning blue sky. The painters both looked up and the ultraviolet stung their eyes. “That came from up there!” Dominic placed his hand over his eyes as if he was saluting and saw only a passing gull. Female screams pierced the air again, followed by melodic laughter – and this time it came from behind the painters. They both turned around and looked out towards a Liverpool skyline ghosted by the haze of the heatwave and a light wind gently wafted up an aroma of tar and Mersey salt, and there in the distance, some 400 yards up in the Alice-blue sky were three colored dots. “Balloons” the other painter, Eric, muttered, but the superior eyesight of youth could plainly see three people, and Dominic shook his head, “Its three girls!”


The hay fever began to water Dominic’s eyes and he sniffed and rubbed them and looked again and the three girls moved off towards the north, until they were specks over the river. Then they were gone. Eric stuck to the balloons explanation but a sneezing Dominic knew what he had seen. Eric then blamed the lad’s hay fever. About 10 minutes later the men had managed to resume painting. Eric climbed a ladder and then Dominic felt paint trickling onto his head. “Eric!” he looked up and saw his workmate gazing at something in a daze with paint dripping off the brush. This time the three levitating women were almost near enough to touch as they flew by, and Eric swore in shock. The first woman in the formation was a brunette of about 30 sitting slide-saddle on a brush, and wore a flowing pinkish dress, and the young blonde lady flying behind her had her hand on the broom-mounted woman’s shoulder. The third figure flying closely behind the blonde one was much younger, possibly in her teens, and she was also blonde. All of these females were laughing and giggling and the brunette was screaming as she almost fell off the broom. They were oblivious to the male observers as they flew in the direction of Bidston Hill. Eric was so shocked he had a ‘funny turn’ and went home.

According to the source (Slemen) years later when he gave an account of this incident on the Billy Butler Show (radio) he was inundated with calls and emails from people of all ages and all walks of life who recalled the “witch scare” that summer.


HC addendum
Source: Tom Slemen’s Spooky Summer: Broomsticks over Birkenhead – Liverpool Echo Type: E
Comments: Slemen comments that “someone reading this knows the truth”, I can only conjecture what these flying women were. Modern day witches, apparently that’s what they were trying to portray themselves as? This one is beyond strange.
at February 23, 2018